Yesterday I spent the day in a perpetual state of excitement which resulted in feverish cheeks and having to lie down quietly for a bit.

Last night I finally got to see my favourite comedian live, the one and only Mr Bill Bailey. For those of you who still do not know any of his stuff (I have berated you on here before) then please will you go and equip yourself with a copy of Part Troll!

I have been trying to go and see him for a long time; first time I wanted to I was in Bristol, but failed to get a ticket in time. Then I was too poorly, then Laughter for Life happened....and I got new lungs (yay!).

So was rather excited when I managed to get tickets for him latest tour. Even more excited when A and I got VIP passes to the drinks after the gig and I got to meet him! He's a really genuine guy and keen to keep supporting LLTGL which is fantastic news. 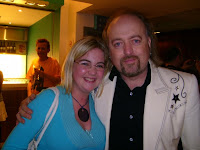 The whole night was awesome, very very funny, and for me a strangely big deal. Not only because I am a rather large fan, but because it sort of symbolised the fact that I am no longer in that fragile state where it's risky to make plans for 24 hours time, let alone for a month or so down the line. I can now make plans and stick to them. Which is quite exciting really and opens up the possibility for all sorts (ie holidays) which had become far too difficult a task prior to transplant. I booked these tickets months ago, and remember feeling everso wary about whether I'd be well enough to make it...but repeated hospitalisations are a thing of the past. I have new lungs.

This year has been such an incredible journey, and there is still so far to travel, so many possibilities and new experiences which lie ahead....I can't help but be an over excited child who's constantly grinning from ear to ear.
Posted by Tinypoppet at 12:16 PM

Shhhh! Don't tell anybody but Bill regularly trys out new material on the audience at the Outside the Box comedy club at the Fighting Cocks in Kingston upon Thames - you can tell him how hard you were laughing as he packs up his guitar type thing (sazz?).

Did he do the 'you have chosen to cancel your AA motoring cover' monologue? I've heard it twice now and nearly fell off my chair laughing both times!

YAY for finally getting to see and meet BB !

I think you make a lovely couple ;-)

I am sooooo jealous of you. I LOVE Bill Bailey. If I could have managed it I would have been at Laughter for Life, JUST to see him (and support the cause, of course!). You lucky ducky!

I must say a tad on the jealous side that you did actually get to meet him and have your photo taken with him!!

Although I must say I found the show so funny when I went to see it. I must say sitting two people with cf (me and my sis) in a nice echoy part of the ice stadium was probably not the best of moves!! hee hee - especially when we started coughing just one after the other.

He is so funny!! Still so slightly ever jealous that you got to meet him!!!!! Dont forget though-
I've got ham but im not a hamster!

Ooooo I was there too!! I must admit I did think of you when I was there because of the whole Laughter For Life gig.

I'd saved one of my oxygen cylinders specially (out of my grand supply of 3) so that I could actually manage the walk to and from the tube, not to mention getting up into the gods where our seats were!!

It was a fantastic show, that zitar (sp?) battle was fantastic fun, really got the bump wiggling hehe!

As for the idea of a leopard wearing a bobble hat hehe still giggling over that :o)

Yet again, awesome to see you reveling in your new life