Eep, a very neglected blog! In fact I only realised how long it's been since I posted when I got an email from a follower, checking everything was OK! So apologies for that folks.

As always, great big lapses in blogging means that life is going well, and far too fast. Health is fine at the moment; following my last bronch I was started on steroid nebulisers and they also discovered I had a chest infection (which explained why I felt so hideous afterwards). The combination of whacking that infection on the head plus these steroid nebulisers has been really positive and the best bit is, I had my monthly bronch on Tuesday and for the first time, the airways were open enough that they didn't have to do dialitation! I'm due in clinic in 4 weeks, but this is an excellent sign as it looks like said airways are getting bored of mucking around and starting to behave nicely.


Stomachtwistyop wise, I've had my outpatient appointment and I've had my pre-op assessment and I FINALLY have a date for the op; 6th April. Am a little frustrated to say the least, as this will be a grand total of 5 months after referral, and I know the surgeon who reviewed me put me forwards as urgent. But at least I have a date, the op will get done, and hopefully my right lung will be impecibly behaved afterwards.

The most exciting event in the last month is probably the fact that I somehow managed to win the Lifetime Achievement award at the Justgiving awards! It was a wonderful night, full of inspiring stories and fantastic people, and I was genuinely shocked to win. LLTGL were up for Best New Charity but were beaten by Shelterbox. We all had a fantastic evening and you can read more about it on the LLTGL blog here. Here's a few pics: 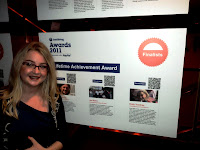 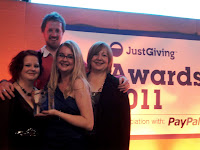 Work is great, exceptionally busy, but am currently on half term so am trying to catch up with myself. I am hoping next half term is slightly less frantic as I do feel like I'm chasing my own tail most of the time at the moment! What a nice thing to have to worry about though, being too busy. Hopefully won't leave it another month till the next update!
Posted by Tinypoppet at 4:25 PM 6 comments: