I've started rewording this blog now for the umpteenth time so I'm just going to write; I keep worrying as to whether I am saying the right thing or not. I need to just write.

I am missing Jess very very badly at the moment. We texted back and forth most days and it hurts knowing she hasn't made it, that her glimmer of hope came too late. She should have made it, I think I am angry as well as sad, she should have had her call earlier. Four and a half years of clinging on is just not fair, and consequently, her body was just not strong enough.

Instead of going on and on about the sadness and the ache which is currently making me feel quite blank and flat (this is my blog, I'm allowed to be selfish) I'm going to talk a bit about what I loved about Jess and more importantly, what she taught me.

Jess was the strongest person I have ever met. Literally. When we went up to decorate her hospital room at Christmas, she was fighting so hard I have no idea how her body was doing it. Mentally, she never ever gave up either. She had a determination in her, a fire that made her so sure of her path and gave her such a focus. It inspired and motivated me to do more.

Jess had a huge heart. She was in hospital having a rotten time when I put up some sort of sulky status about something completely mundane I was annoyed with and the text came through almost instantly "Are you ok? Thinking of you x" Typical Jess always thinking of others; a memory that several other people have conveyed to me in their messages for her condolence book (which, incidentally, if you'd like to contribute to is open to anyone - no matter whether you knew her or merely knew of her and were touched by her - email me for more info). When I was in hospital for IVs this November, I texted her one day saying I was sending her all my mendy vibes and she texted back saying "no please save some for you."

She had a fantastic sense of humour. When Holly and I went to film with her for Battlefront, we spent most of the time being gently reminded by the crew that this was supposed to portray the severity of life on the list. It was hard as Jess' nature was to laugh and smile, and we all kept giggling and gossiping. We did get the filming done in the end and Jess' contribution to Holly's Battlefront episode - her frank portrayal of life waiting for lungs - was a vital one.

She reminded me what is important. Jess absolutely adored her family and her friends, and would tell people that they were special to her. When she decided to do something, she got on and did it, never mind whether it was practical, easy or virtually impossible. I think post-transplant, it is easy to loose some of that spontaneity, to forget to tell people regularly how much they mean to you. I intend to remember that.

I am definitely struggling with survivor’s guilt. I know it’s not uncommon and I’ve felt it before when losing friends with CF, but it’s pretty full on at the moment. Why on earth am I so special that I got this magical chance? I know the answer of course; it’s because there is no rhyme or reason. Just because Jess gave and gave and gave and fought harder than was probably humanly possible...effort sadly does not guarantee who gets the winning hand. Our paths were so similar in so many ways; both pretty stubborn, both fairly high-profile fights, then she decided to do the Hydro Active... I felt like she was a younger version of me. Perhaps because of that, I had a naive subconscious belief that she had to make it through, because I did, so it was only logical. I hate that I was lucky and she was not. I told you, my blog, my ramblings. My thoughts are with her incredible family and those closest to her; I cannot imagine just what they are going through.

Jess fought for what she believed in. She believed very strongly in organ donation, so instead of sitting around she got up and fought. And never ever stopped. Ever. That’s my biggest lesson; to live and laugh, to love those around me, and to fight for what I believe in. And to never, ever stop. 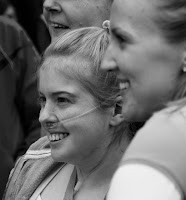 I think most of you have heard the heartbreaking news about Jess, but this blog isn't about that, as I can't write that blog just now. In fact I'm struggling to write anything coherently at the moment; my words seem to have escaped me, all words, my ability to type and to write. It'll come back, I'm sure it will.

This blog has been triggered by a girl called Tori who is waiting for a double lung transplant. Her post that got me thinking is here. She actually keeps two blogs, the other one can be found here.

Reading her post about sharing her story publically got me thinking. Particularly this bit:

When I talk about my CF I try to emphasize all the positives, tell people what I'm still able to do and how although I might feel crappy now I'll be better in a few days. I decided to submit myself to Live Life to Give Life as a face for their media campaign and am now having to forget all the positives and focus on the hard stuff, otherwise am I a good person to motivate people to sign up to the organ donation register?

I started reading back through my blog to see how I spoke about the struggle to keep going whilst waiting. I think this month gives a fairly good mix. I think (and hope) I spoke honestly, with a mixture of good and bad, because I truly believe that you can give a balanced picture. The illest of ill people laugh and smile and have good times. And maybe by sharing your personality it makes the story even stronger?

Life isn't black and white, therefore adding colour and texture to the picture you are trying to paint makes it more realistic...doesn't it? Then again, in order to highlight the urgency, it is important to focus on the severity. I know all too well that mask of "I'm fine" that people waiting for transplant painstakingly paint on. You have to, because if you start thinking about how hard life is all the time, it makes daily life pretty hard to face. But if you don't speak the truth about how hard life can get, can people really understand? 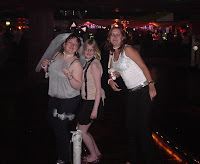 Yes that's me in 2006 in a nightclub. With my oxygen on. Looking a tiny bit blue.

I'm not attempting to answer questions here, I'm just very interested and grateful to Tori who gave me something else to think and blog about.

Apologies for the scatty and poor writing; any ideas or opinions on this would be great. And do stop by and say hi to Tori on her blog as she continues to write about her life, her wait and her hope for transplant.

My next blog will be about Jess. I just have to find the words.
Posted by Tinypoppet at 2:53 PM 2 comments: