I seem to have lost the ability to say no. I figure they must have taken it out by mistake when they removed my old lungs. Actually, thinking about it I never really had that ability, I reckon I was born with some innate fear of missing out or being left out. As a child, my hand always went up first for everything, volunteering left right and centre, not so much because I thought it was good, but because I was over eager and excitable and essentially wanted to be involved in whatever it was.

Anyway. Since my transplant, I seem to have become increasingly worse at saying no. Any invites out that come my way, any offers of trips, anyone who asks to be picked up, you name it, there’s me hopping up and down in the front row begging to be picked. This last week has bordered on ridiculous with me tiring myself out to such extents that I have been getting home, taking my immunosuppressants and diving straight into bed, sleeping soundly till I am out of bed and off and out the next morning. I am in no way complaining, merely relishing in the fact that I actually have to remind myself now to slow down. Although some of you may argue that I was on fast forward even when waiting for transplant, just in my own breathless dog-tied-to-a-pole kind of way.

I didn’t make it to a club on Friday night, I did however go to a pub with a disco which was almost the same thing and had the most fantastic time. I was first on the dance floor, and we left after jumping up and down to “Don’t stop me now” which was an awesome finale. Bouncing around waving my arms in the air (yes I did look about as graceful as that sounds – you can’t dance gracefully when you are so ecstatic about just being on the dance floor tubeless) I was really struck by the difference. I haven’t really danced since my transplant, and the tiredness was just a completely different sensation. Previously it was one of despairing finiteness, one where my whole body ached if I dared attempt half a song and my lungs never regained their puff. Now it was sore feet and sweaty hair, not attractive, but so indescribably good to feel normal exhaustion, one that does not signify your body attempting to shut down. 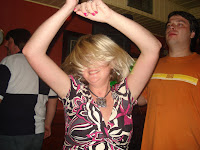 Today was a family outing (we do indeed still do them despite all “children” now being over 16) and we went to the Globe to see Othello. It was a fantastic production, I recommend it. We were somewhat overconfident on my walking abilities resulting in me having to get a taxi between certain parts (not within the globe that would just be silly) but other than that it was brilliant.

I am expecting next week to be somewhat quieter, although it was on the front page of the Times today about the opt-out system debate. People constantly ask my opinion on this (unsurprisingly) and it is difficult to vocalise succinctly. In essence, it seems like a great idea, but I feel it is not the solution. I feel education is the solution. I mean even if we do switch to opt-out then fine, but surely in order to do so we will have to heighten education and awareness and also improve funding for actual transplantation and donor retrieval therefore there is a lot more to it than to simply switch the system. Still I love the fact it is back in the news, keeping the thought of it in the public eye is the most important factor. Which is clearly why we do silly things like spending a whole Saturday building a giant love heart.

I am feeling a little bit wobbly as we go into this week, as it is a year ago that my lung collapsed and I was left fighting for my life. It was also a year ago then that the team called my family into the relatives’ room and told them that nothing more could be done. Weirdly my other lung collapsed around the same time the previous year. I think that one lung saw all the attention the other lung got and decided to put in a repeat performance. Obviously I know that these are completely different lungs, not full of cysts and holes and things like that which made them so prone to just sitting down obstinately, but it is still a tiny bit nerve-wracking. Although also exciting that this will hopefully be the first summer I get to experience in three years. Apart from squeaking, these little lungs are proving to be incredibly strong and well behaved, and I am hoping that we will have a fairly restful but fun filled summer together, preferably not involving chest drains if at all possible.

**edit** - so far, quiet week not proving to be, er, quiet...so look out for me on GMTV and channel 5 news tomorrow morning!
Posted by Tinypoppet at 9:14 PM

It's rare for me to be witness to someone keeping one eye on the past, enjoying the present whilst looking to the future. In this post you seem to be doing all three, all perfectly balanced alongside each other.

Luckily for you, I'm very fond of girls who can't say no ;-)

I should think that wobbliness is to be expected given the past year's events.

The squeakiness is just endearing :P

I think you need to figure out how to permanently embed that song or some other one in this blog. You have rather lively taste in music.

I'm still trying to envision this squeakiness you speak of. Kina never squeaks that I've ever noticed.

Hmmm. Well...you are quite unique and lovely. Keep on squeakin'.

you are certainly living life in the fast lane, no doubt making up for all that lost time. Don't overdo it, it sounds like a punishing regime even for someone who has not been so ill recently.

I definitely agree that you are allowed the occasional wobble after what you went through. Just great to think you have brand new lungs which are not going to let you down in that way. So keep on dancing and having fun........

The first comment says everything I wanted to say. But couldn't have done so succinctly.

glad 2 hear that all ur talks etc r goin well. its gd 2 hear that u can go clubbin and stuff now-without a oxygen cylinder.
keep up the advertising and keep hain fun-but dont wear urself out 2 much.
love
jennie higgins

GMTV was great this morning - you made me late for work! The 'opt out' idea is an interesting concept (what happens to tourists in this country for example? how much of a say do the family still have?) but it is good to see the debate in the media all the same.

I've been following your blog for the last year or so and its gives me so much inspiration you truley are an amazing girl! whenever I need IV's or have a down time you remind me how the powers of positive thinking can work wonders!

I'm not sure if you'd be interested but a friend of mine wanted to interview me for a magazine, but I thought your story was a lot more inspiring especially with the media coverage of the new opt ouy system.

if you are interested please email me on rachelagutter@gmail.com and I will let you know the details. Its for a pretty good womasn mag, i guess anything helps with publicity!

Hope to here from you soon.
love,

I've been following your blog for the last year or so and its gives me so much inspiration you truley are an amazing girl! whenever I need IV's or have a down time you remind me how the powers of positive thinking can work wonders!

I'm not sure if you'd be interested but a friend of mine wanted to interview me for a magazine, but I thought your story was a lot more inspiring especially with the media coverage of the new opt out system.

if you are interested please email me on rachelagutter@gmail.com and I will let you know the details. Its for a pretty good womasn mag, i guess anything helps with publicity!

Hope to here from you soon.
love,