Today was the official launch of National Transplant Week, organised by the charity Transplants in Mind. It was held at the House of Lords and both Emma and myself attended. It was a wonderful afternoon, with some marvelous speakers, one of which was Robyn Tainty. Robyn is currently on the list for a double lung transplant and while she is a feisty little fighter, she is struggling a great deal now and clearly running short of time.

She had to pause to catch her breath and Emma had to take over during the speech. It really hit me hard, I did that same speech last year, that was me, sitting there, gasping for breath, desperate for a new lease of life, and it was very strange and very emotional watching someone else go through what I had done. I had to push back the tears a few times, which surprised me as I consider myself quite hardened to these things by now, but it just goes to show, no-one ever tells it as well as someone who is going through it.

There is hope for Robyn but time is of the essence. It was so hard to watch her do that speech, talking about the fact her chance may never come, watching her mum's face as she stood watching her daughter....I cannot believe that was me up there last year. I am just so incredibly lucky. And all I want is for her and Oli and all my other friends waiting to be as lucky as me.

On Saturday we are trekking up to Birmingham to build the world's biggest loveheart with the words GIVE LIFE emblazoned across it. This may or may not be a good idea, we shall see. 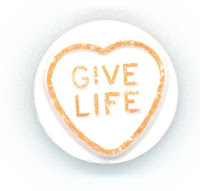 ps - watch Richard and Judy on monday. I have to say that or people lynch me afterwards.
Posted by Tinypoppet at 8:32 PM

I truly enjoy some of your postings -- they are well written and very often grab my heart. One of these days very soon, I would like to reference your blog on our little blog, Revive Hope I truly admire what you do...

I hope Robyn gets her lungs soon -- Like you and her, I too have cystic fibrosis. And, like you, I've received two beautiful, new lungs...

And I can understand how you felt it difficult to watch her speaking -- and reminisced about your own journey... I am a little surprise at your comment about considering yourself "quite hardened to these things now..." That hardness doesn't show in your writing...

Personally -- I find myself quite the opposite! It's been seven years since my transplant and were I to see Robyn speaking, and having to pause, I'm pretty sure that tears would be rolling over my cheeks! And I don't ever, EVER want to lose the ability to get emotional like that. Perhaps it's because I now have girl's lungs and I'm a bit more sensitive ;-)

I'm proud of what you do for Life Life then Give Life, and all you do to promote donation for people like Robyn. You're doing something very powerful, and very good.

Emily, a celebrity. Nice knowing you.

What a beautiful child Robyn is - I can well imagine how incredibly difficult it was for you Emily, to watch her going through the same struggle you experienced. Don't worry, Robyn will get her chance. My thoughts are with her, her Mum and all her family and friends and will all your friends and acquaintances awaiting their turn. You are all amazingly brave - I wish I had a fraction of your courage.
A bit hug to all of you.
Janet

Like everybody else, I have everything crossed that Robyn and everyone else waiting get their 'new start' very soon.

Glad to hear all went well with the bronch Em and well done for the continuing campaigning.

Hi Emily
I really hope that Robyn gets her lungs soon!
I was talking to my friend earlier today and I asked her if she would give away her organs, if something bad were to heppen to her (which i really hope it doesnt) but she also said that she will sign up and get one of those card things when she is 18 (do you have to be 18 to get them).
Anyway I just wanted you to know that more people hear abo9ut your story every day and more people are becoming aware of how great organ donation is.
I know for definite that I will get a card and would hapilky give away all my organs now (except I've heard they are quite vital for me to live!)
I hope everyone someday will see, that just by getting a card can save someones life.
Love and big hugs
Jennie Higgins