This is going to be a long blog, as Sunday 6th of September was a long (but very wonderful) day. 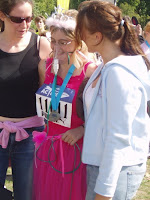 
The lady in the blue hoodie in the first shot and hugging me in the second is Hannah. Hannah was my physio when I was in hospital training for the 5k back in 2006. Hannah was the one who would come and see me several times a day, would help me mobilise and build up my distance, and who walked with me and another wonderful physio called Vicky, to the finishing line.

So why when Jess announced she was doing the 5k I didn't realise Hannah would have something to do with it, I don't know! Seeing Hannah there was hugely emotional, the last time I was in that park with her I was in Jess' position. It really brought it all flooding back to me, especially when she said "I never thought I'd be walking alongside you like this" whilst hugging me.

Anyway enough about me - I know this is my blog but I'm writing today about Jess' achievement. She did amazingly. She was all clad in neon and smiling constantly.

She looked somewhat nervous and was quite quiet (doing a much better job of not using up all her puff than I did) but extremely determined. Several members of Jess' medical team from Kings were there walking with her, some running ahead to complete their own personal challenges.

Jess was aiming to walk 200m out of every kilometre. She did it (I don't know how) and did it with great style, and in fantastic sunglasses. I've made a video here from footage I took yesterday. I don't mind admitting I cried whilst making it and cry when I watch it back. I so want Hannah's words to be true. They have to be true.

I also got to meet Liz and Jan, a wonderful pair of friends who you can read more about on Holly's blog. Walking 10 weeks after their ops? Pretty damn inspirational. Speaking of Holly, massive thanks go out to her for taking these amazing pictures.

I struggled slightly during the race - partly due to falling down the stairs in the week and bruising various parts of my anatomy quite spectacularly, but to be honest was pretty focused on watching Jess and willing her on. Crossing the finishing line was extremely emotional, and I brushed away the tears whilst whooping with joy and jumping up and down (which is why it appears as if the cameraman has fallen over on the video at this point).

After congratulating everyone and telling Jess to go home and get some rest, I set off for Croydon to support the wonderful Lou. Lou was doing her sponsored tree hug that afternoon and I was determined to get down there and be there for her. A 2 hour tree hug might not sound like much, but when talking makes you breathless and your arms and legs have virtually no muscle mass, it's a huge challenge. 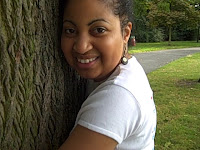 Lou did fantastically well; it was hard work, and she was in quite a bit of pain by the end, but she clung on for dear life. I have some footage of her too and will be editing it and putting it up soon. I am just glad I was able to be there with her, cheering her on.

I am not feeling great today as a result of lots of rushing around, but I am pretty sure that's nothing compared to how Jess and Lou are probably feeling. They did so incredibly well, it's spirit and determination like that which is why both ladies are still here, after all they have been (and are still going) through.

Told you it was a long blog. But a good one I think. Hurrah for fabulous girls achieving huge amounts and rocking muchly.
Posted by Tinypoppet at 3:31 PM

I wish I had been there to support Jess. Next year I will be there to see her walk all the way round with her new lungs, because I just know she will get them soon, like you did. She reminds me of you - determined, spunky and oh so courageous. I can't believe how much your life has changed since that first Hydro - I hope with all my heart that Jess gets the same chance. Much love, as always, xx

Wow Emily, that post took me back a few years. I've not checked up on your blog for a few months, funny that it should be around the anniversary of the time I met you. It's incredible to think how much your life has changed since then.