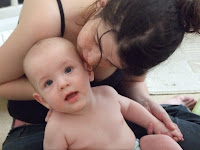 It's been a sad 24 hours as we lost Toria (above) after a long and valiant struggle with CF. Toria leaves behind not only a grieving family but an 8 month old little boy. Take a look at her blog at some point; she was an extremely talented and open writer and it’s well worth a read. Along with feelings of heartache for her family, it has raised some hot emotions and some frank confessions.

I don’t really want to write too much on the subject as the most important thing is to remember Toria and what a wonderful vibrant and strong person she was, but to the Anon commenter on Oli’s blog, his feelings were only as judgemental as yours. Humans feel deeply and passionately and sometimes feelings are driven by emotion. No one can help that; that is why you wrote what you wrote and why Oli felt what he felt (which he is shrewd enough to observe about himself in his blog). As far as Toria goes, I’m just so saddened; she was a truly feisty woman who I was privileged enough to talk to on many occasions, and will be greatly missed by everyone who knew her. Thinking of her wonderful family, L and E at this sad time.

Moving on....I had another blood test last week which brought me back down to earth with a bump as my creatin (or apparently creatinine? Did I make the first up?) has risen again to 134 – highest it’s been. Humph. I am awaiting further instruction from Harefield. I’m feeling great (yay!) but I suspect they will want to try this new Immuno and have to confess I’m scared. Scared because I have been so so lucky. No rejection so far (touches wood 1000 times) which is almost too good to be true. And the cyclosporin is the only drug which I have been on consistently since day one, so it’s hard not to attribute my good fortune to this.

As always, the most important thing is to listen to my team, so this is what I am planning on doing. They’ve seen all this before and have told me already it’s a fairly common side-affect of cyclosporin, so whatever they say goes. Even if I do have a bit of a pout about it. My potassium was too high to but a) I don’t know what that means and b) apparently it can be caused by the “trauma” of taking the blood (I had 5 attempts with two people trying) so they’re just going to re-do the blood tests; probably nothing at all to worry about.

Lung-wise? They are awesome. Work wise? I am happy, busy and feeling very fulfilled. Life wise? It rocks and I love it.
Posted by Tinypoppet at 8:58 AM

I'm embarrassed to ask this, but Toria is the same person as the Toriey pictured pwcf.net, right? I never knew her personally but I knew of her through the community for many years, and was gutted to hear of her passing.

Yikes, sorry to hear about your levels. Have faith though, those smashing docs have not had you come this far to muck things up for you now. It'll be fine.

Hope you had a fab time in Paris.

My heart goes out to Toria's family.

Have a look on Liver Families, there are several people who have had to switch from one immunosuppresant to another due to kidney problems and I can't think of one who had a problem with the switch. I hope you can say the same thing, I'll be looking out for updates.

Hiya so sorry to hear about yet another loss of another friend of yours.....may she rest in peace our heart goes out to her family....

Rach has swopped immunosupressants and her GFR kidney function has gradually improved after 1yr of slow but sure decline....Hoping fingers crossed kidney function remains stable...

Hi Emily, what a great blog. You're definately a very inspirational young woman. I'm so sorry to hear about your friend, it's so devestating hearing of a passing more so when it's a friend. My heart goes to her family and friends.

Also i hope they get your levels sorted. I know how you feel as i too am very sensitive to drug changes. I have always been on tacrolimus but at one point my levels went a bit wacko so they tried a combination of other immunosupressants which didn't work as well so they put me back on tacro and played around with my dose until it finally settled down again.

Take care sweetie and thanks for all the hard work you and the guys at LLTGL do.

hey em,
on the potassium front it's called heamolysis and happens when blood cells get injured when they take blood-- this has happened to me on a few occaisions. Hope the immuno switch works out for you.
jen x

I'm sorry to read about Toria - what a lovely picture. Condolences to all who are missing her presence.

Hope things continue to go well for you. x