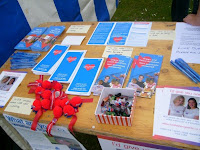 Yesterday was Ashtead Village day, where we had (very kindly) been given a pitch for free. I gathered together a team of helpers (bless their cotton socks) and the four of us set off for a 9.30 start. As well as a ton of info on organ donation and on CF, we had a few little elements to try and entice people over, such as a raffle, a win the teddy competition and mints (which sounds weird but really worked!) We had a constant flow of people around the table, some just taking donor cards, some stopping to chat, some with their own stories, others just wanting to hear ours.

The two most common myths which cropped up time and time again were:

“I’m too old”. This is nearly always incorrect. The oldest donor so far was 82. There is no age limit, instead they look at quality of the organs.

“I can’t donate I have asthma/diabetes/MS etc.” Again, incorrect, and frustratingly according to several of them their doctors had told them they could not be donors because of it. Whilst these illnesses could obviously affect organ donation, the only two illnesses which categorically rule it out are CJD and HIV.

Another very common phrase we heard all day was “oh I have been wanting to get one of these [a donor card] but can never find one.” This is almost certainly true, and it bugs me. Why is it so hard to find a donor card? And it really is. I don’t know of many shops that have them by the checkout, nor many doctors surgeries which is more worrying. Boots advantage card has a section where you can indicate that you are an organ donor which is great. The new driving licenses obviously, but there doesn’t seem to be a clear indicator on that (I think it is some number in a category or something).

I know the most important thing is for people to join the organ donor register, but I feel that for people themselves and their families, they want something tangible, something that verifies it for them. We had leaflets where you could just send the slip in to join the register, but many people requested “the one with the card on it”. In 1998 the BMJ published this article which talks about the idea of the donor card symbol being on a credit card. After all who doesn’t have a credit card? I have often talked about all store cards following Boots’ example because I don’t think I know of anyone who doesn’t have at least one store card, surely they could all offer the option “do you want to be an organ donor?” on the form you have to fill out?

Anyway grievances with national attempts at awareness aside, the only way forward it to talk to people about it and help them make an informed decision. We left Ashtead with 48 filled in forms to post, and loads more people took them away for themselves and for friends and family. We had a really lovely day, I had no voice at all by the end of it – had been putting my new lungs to good use by shouting about it to get attention! Hope everyone had a lovely weekend in this absolutely gorgeous weather!
Posted by Tinypoppet at 9:31 PM

that sounds like a really great day's work. I'd actually now really like to repeat your efforts myself. but the next fete thingy coming up here I am already roped in to serving teas at! "Would you like a donor card with your tea?"

The driving licence bit actually gives you the option to join the organ donor register. However, as you say, people like to be able to see something in evidence of that! There are little numbers on the back of the photo card- I have three on mine, one indicated that I need spectacles to correct my vision to driving standard, one that I am on the ODR and the third...I can't remember. I assume the idea is that A&E will check the back of the card as they use it to ID a John/Jane Doe, but I'd be surprised if that happened in reality.

I think the advantage card makes it a bit more obvious, you get the blue and red symbol on the front.

well done for a fabulous day's work. i'm sure it helps that you yourself are such a compelling advert for what organ donation can do, but nevertheless it sounds like you had a great result.

Emily,
I had a girl who commented on my blog whose grandmother became a donor at the age of 91 a few weeks ago. They were surprised, but it goes to show that it is indeed possible.

Well done with the awareness raising, it's fab :D x