Very sadly, my friend who I spoke about in the previous post past away. My thoughts are with her family and friends and she will be greatly missed. It is sadly another huge reminder of how much work and awareness raising there is to be done.

Onto brighter things, I had the most fantastic day today! It was my mother’s school summer fete and I went along because not only have they been amazing and supportive of my mum since she started there, but they are kindly giving all the money from the Raffle to the CF Trust. Laurence Dellaglio opened the fete, I got to chat to him a bit, he was very friendly and posed for a pic and said he was in awe of what I had gone through. 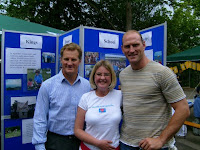 I accompanied my mother as she set to work on one of the stalls, and I enjoyed it so much I took over her shift and stayed there. People kept worrying if I was ok or if I was wearing myself out but I just love to have something to do and be busy, and I think because I am so used to doing things running on empty I now feel a bit like superman (oh dear the superman complex that Harefield have warned against). It was lovely to chat to all the children, and the parents who have been so sweet and bought me presents after my transplant despite never having met me. The committee had all purchased LLTGL T-shirts and so there was quite a few of us sporting them dotted around the fete. The weather couldn’t make up its mind and kept thundering intermittently but it didn’t spoil the atmosphere at all.

Then as a massive favour to us, Richard turned up to draw the raffle and thank everyone for their support. It was the first ever time he has seen me without oxygen. I turned round to see him, ran at him and he threw his arms around me, lifting me up as he did so, exclaiming “did you just run?!”. I don’t think he could believe it is such a transformation. I chattered away (hard to believe I know) till he had to go but not before taking a video of me on his phone for Judy who he said wouldn’t otherwise believe it when he told her! I jumped up and down whilst he was filming just to demonstrate what a complete transformation it really is. It looks like I might be on their show again in the next month or so, so watch this space… 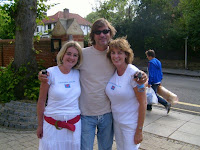 So yet again today I was surrounded by amazing giving people who just want to help and want to support me and my causes…people in this world are really pretty great when you look closely.
Posted by Tinypoppet at 6:39 PM

Sounds like a lovely day. Love the way you just casually say "Richard" - it took me a while to know who you meant ;-)You sound so full of life it is amazing! Can't wait to see you again at the Hydro Active x x x

So sorry to hear sad loss of yet another friend....... our condolances to her family at such a difficuilt time for them all....

Glad to see you still promoting organ donation through publicity etc and you look amazing in your pics :D

Emily, congratulations, you continue to amaze us all.

I'm so sorry to hear about your friend, Em - my thoughts are with her family and friends.

Good to hear you such a good day! Yey for celebrity appearances!

Ahhh, sorry to hear about your friend. Very sad news.

I was just musing to myself a few days ago, when I saw a new series of Richard's show being advertised on tv, how long it would be before we would see you!

Lol at the way you just casually throw Richard's name in mid-blog ;-) Glad the fete went well and your energy levels are keeping up with your enthusiasm!

sounds like a brilliant day. So funny how you just mention Richard casually into the conversation! hehe. I didn't get who you meant until you said judy. (i didn't think they came as a singular anyway?!)
xxxx

Now Emily this Richard thing will have to stop he's far too old for you ..SEND HIM TO ME!!!!love the photo of him..you lucky girl!!!luv annex

my condoleances to your friend's family - how heartbreaking it must be for them. May the knowledge that she is now at peace and free from suffering, and spiritually still very close to them, bring them solace. We are all understandably attached to our bodies with all their failings but they are not the essence of who we are and that essence is eternal (at least, I believe so).
J.