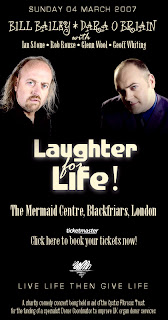 Hi everyone, it's Emmie here! I thought I'd give everyone a little update on a big project that Emily and I started work on 6 months ago and which is now finally almost complete!
As some of you may know, last summer Emily was in hospital for several months and during that time she was contacted by the legend that is Bill Bailey, who phoned her up for a chat and ended up being on the phone for an hour (I wonder if he actually got a word in edgeways?!)
Anyway, Bill Bailey was so touched by Emily's situation and personality that he offered to do whatever he could to support the Live Life Then Give Life Campaign (which Emily and I founded last year). Well with an offer like that, organising a charity comedy night was the obvious option!
In the midst of all the preparations however, Emily decided it was a good time to invest in a new pair of puffers (she had heard they were this seasons' latest accesory...) and left me staring down the barrel of a gun with 6 weeks to pull together the entire show (thanks Em!) Not that I would have changed anything for a minute as I am just so happy that Emily has finally got the chance she has been waiting so long for and I'd organise 15 shows if it meant she could have this opportunity.
Thankfully in Em's absence I have had some wonderful helpers in the shape of our mutual friend Oli Lewington, my husband Brad and a variety of others and I'm delighted to say it's NEARLY READY!!! Laughter for Life! takes place on March 4th 2006 and all information can be found HERE
We were astounded when tickets sold out in just 2 weeks and are delighted that we will have a full house on the night. Apologies to those of you who haven't had a chance to get tickets, but if you would still like to show your support for a venture that Emily has put a HUGE amount of work into, then please visit our Justgiving Page where you can make a donation. All funds raised will go to the Cystic Fibrosis Trust to be used for the specific purpose of improving organ transplant services in the UK - thereby giving more people the second chance in life that Emily has received.
Well that's it from me folks. I'll leave Emily's family to continue with the updates but from what I've heard it's all good positive progress still!
Posted by Tinypoppet at 2:01 PM

Wishing you the very best of luck, its sounds like its going to be a fantastic event!!

Let us all know how it goes,

Bill Bailey looks like his usual self (whatever that is) and Dara looks a bit of a killer with that black background or perhaps some dodgy gangster. ;)

Emmie, do you know if there's an "age limit" for the show?! ie. will there be "adult humour" etc?! My 12 year old brother wants to come, and if there's no age limit then my mum will give him her ticket! I've looked on the website but I couldn't find any info, but I don't want to assume that means there's no restriction! x

Thanks Emmie! I did think strong language might be a little inappropriate...but thought I'd better make sure! :) x